For those who aren't here to see this particularly... fingerweaving is a tradition in many places. In North America the technique is often used for sashes and bags. I've been doing this for awhile. I think that I'm starting to get the hang of it... 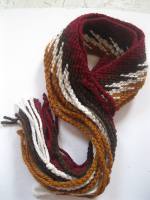 Here is another fingerwoven piece. This one is for the Cherokee Society of the Greater Bay Area. I'm having a good time with these... A few more in the works. I may even fiddle a bit with adding beads, another tradition. 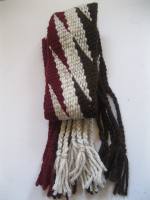 These two pieces are modeled after a Choctaw pouch, although the Choctaw were not the only people to weave them. One is stitched of bark and the other is woven in a more traditional way. I've played a lot with this basket shape, particularly in classes. There is a great proof for Pythagorean theorem inherent in the weave. A square is woven on top of another square and then the weaver collapses them into triangles with the same area. I love those moments in creative process where the perspective shifts dramatically. This shape has a built in "A-HA" moment.

Really... all baskets are math baskets. The math in these is simply more overt. This series first occured to me when I was watching Star Trek: The Next Generation (come on now... my work makes it clear that I'm a nerd) and being distracted by some byplay between the bridge crew I wove too many angles into my plaited basket. In that case I think that it was eight. It was a lucky moment because the 'mistake' was a happy one. I liked it. I started weaving a series of pieces with different numbers of angles. It creates wonderful dynamic shape surprises, and crunched corners. I've since developed a way to notate my basket "plan" so that I can both predict the effects and group pieces that 'rhyme' mathematically. My process is to generate an 'equation' for a piece and then weave that. Depending upon the numbers I've picked there will generally be a few different ways to weave that 'equation'. I've woven hundreds of these over the last ten or so years.

You know... I weave these because I can. Purely ego fodder I'm afraid.

Experiments with hexagonal open weave. Clearly there are many more possibilities for throwing angles in when there are three axis instead of two. Unfortunately they are also less... um... pointy. I like the light coming through aspect but not the flatness of the corners aspect. Should probably play with this notion a bit more. 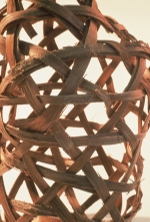 This series was woven on a loom with paper yarn. I was working on a skin and bones idea with the weaving being the skin. Really wasn't overwhelmed by the results. They satisfy the 'bigger is better' focus in galleries, but they didn't provide me with artistic jazz so... I stopped doing them. There has been some talk of creating a series of these for use as dance props and I think that that would make me happy. We'll see where that goes.

All content (text and graphics) on this site are copyright © by Kim Shuck. Kim Shuck should be contacted prior to any use of material from this site. If any question arises about the use items from this site, contact Kim Shuck for permission.